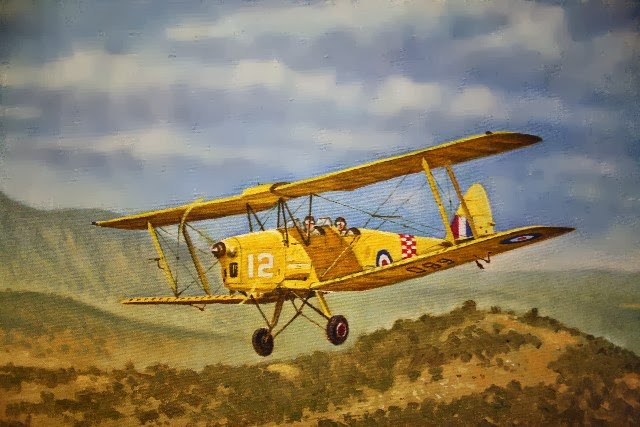 John Wynne Hopkins’ painting of a DH.82A Tiger Moth of the 28 EFTS Mount Hampden.
Under the command of Squadron Leader N E Hendrikz, 28 Elementary Flying Training School of the Royal Air Force was opened in April 1941 “near a small kopje called Mount Hampden.” Their “Trainers of the Empire” or “Tigerschmidts”, as they were sometimes called, had a red and white checkerboard pattern painted on the aft fuselage to distinguish them from their counterparts at Belvedere and Cranborne — a design borrowed from an aerobatic team of 56 Squadron Royal Air Force in pre-war England. As the war progressed, Tigers were shipped in large numbers from England and Australia, until a grand total of 412 machines were in use throughout the colony. They were basically redesigned Gipsy Moths with bigger engines, wings staggered backwards and increased dihedral on the lower mains. Most importantly, the upper wing cabane was moved forward to allow the front seat pilot wearing a chute to get out in a hurry. They were heavier than the Gipsy and, on the good authority of some old pilots who flew both types, they were “not as nice to fly.” 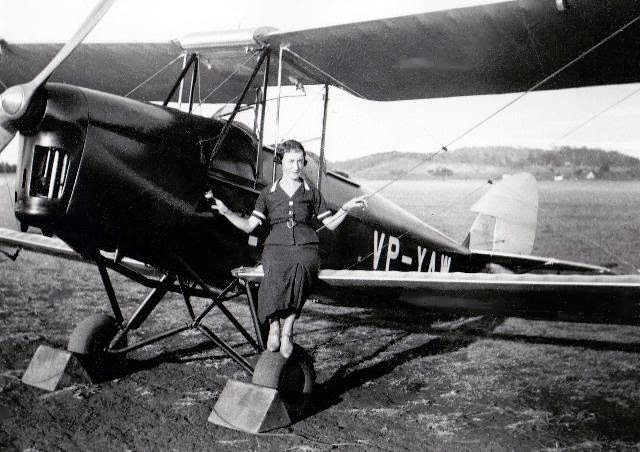 The majority of the aircraft were brand new “out of the box” from the de Havilland and Morris Motor factories in England, although a few were ex-EFTS machines from bases in England. The Australian built Tigers arrived in Southern Rhodesia via Cape Town. Local Rhodesian businessmen and farmers were invited to name a “Moth” of their choice, in return for a very generous financial contribution to the war effort. This added greatly to the rapid induction of aircraft into the newly formed Rhodesian Air Training Group.

The names Rumbavu and Inez were selected by John McAllister Smith.

In the space of four years, 18 Tigers were lost in training accidents in Southern Rhodesia. High density altitude was largely to blame, as well as navigational error on the part of many foreign pupil pilots who were unfamiliar with the Rhodesian topography and tropical weather. One machine from 20 SFTS Cranborne ended up in the Hunyani river, with fatal results.

In order to reduce aircraft attrition and solve the recurring problem of pilot error and controllability, anti-spin strakes on the tails were fitted during the war. But the harsh climate took its toll and eventually all Tigers with over 2 000 hours were scrapped in 1943. Wood and canvas proved to be a bad combination in the fierce African sun and rain. Nevertheless, a number of machines survived the war and appeared in the civilian register after 1945. Others were transferred, via Induna, to the South African Air Force; some were rejected as being in very poor condition. 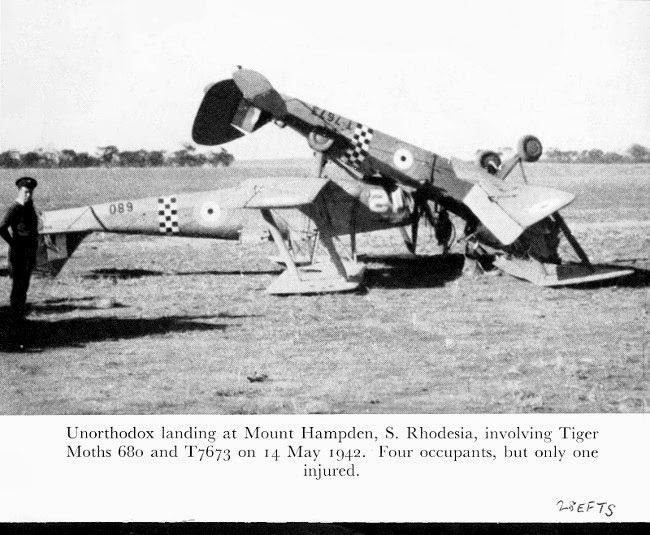 It was fashionable at the time to name aircraft after famous universities — such as Oxford, Cornell and Harvard. Hundreds of Harvards were deployed at the more advanced Service Flying Training Schools in Southern Rhodesia where they acted as a bridge between basic trainers and the high performance fighters of the day. Nearly all Commonwealth fighter pilots learned their basic skills on the early Harvard and later variants — those tough, robust aircraft which required some gentle handling and a delicate touch on landing. 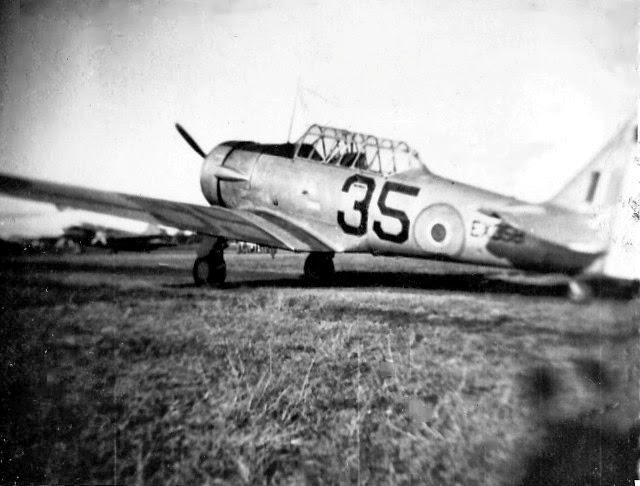 At the beginning of 1943 the Canadian built Fairchild Cornell became the trainer of choice at 28 Elementary. This handsome machine — a monoplane that offered more forgiving flight characteristics than the Harvard and a more stable platform than the Moth — was introduced as a supplementary trainer to the Tigers, at which point their production in Canada peaked at 150 units per month Over the next few years a total of 346 Cornells Mk1 and Mk11, with a confusing mix of RAF and RCAF serial numbers, arrived in Rhodesia via the Cape. Their enclosed glasshouse cockpits, with excellent all-round visibility, gained immediate popularity, although their perspex canopies could be uncomfortably hot in direct sunlight. The engines were six cylinder inverted, in-line, 200 hp Rangers. Other features were: fixed pitch two blade wooden props, fixed undercarriage with large wheel span, dual controls, full night flying capability, steerable tail wheel with brakes on the upper half of the rudder pedals, mechanical hand operated split flaps and elevator trim tabs. They became very successful trainers, requiring only 880 yards of take-off distance at Mount Hampden’s 5000 ft amsl runway. With an unstick speed of 65 mph and a rate of climb of 600 fpm they were virtually vice-less in the air and simple to maintain on the ground. But they still demanded a great deal of precision and care in handling from all trainees who were on their way to becoming combat pilots. 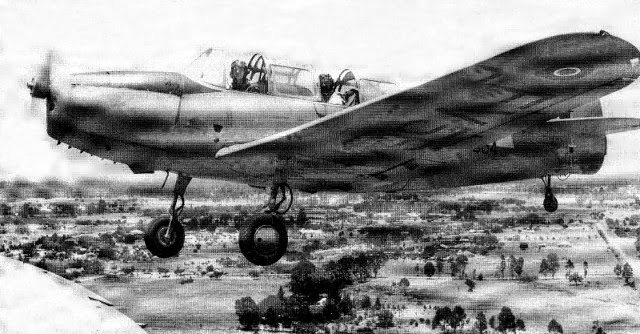 Personnel from many Commonwealth countries were represented at 28 EFTS as well as Yugoslavs, Czechoslovaks, Poles and Frenchmen. Many Greek airmen were there as well and, under Flight Lieutenant Jack Collins, they were one of the largest Allied contingents trained at the Rhodesian Air Training Group. The gallantry of the Royal Hellenic Air Force in the defence of Athens has been well documented and their pilots and link-training instructors at Mount Hampden proved to be amongst the best. 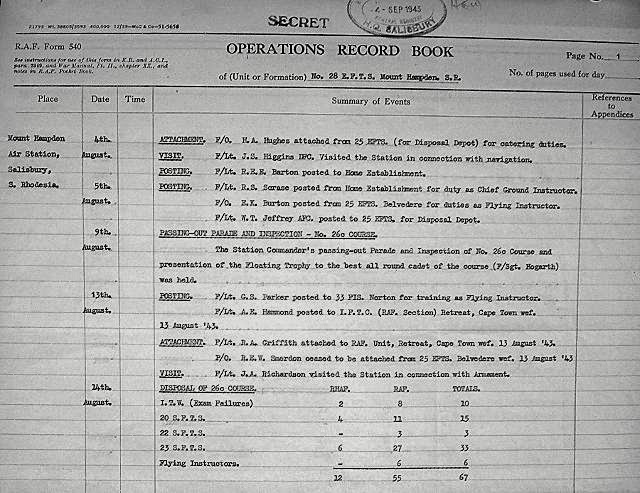 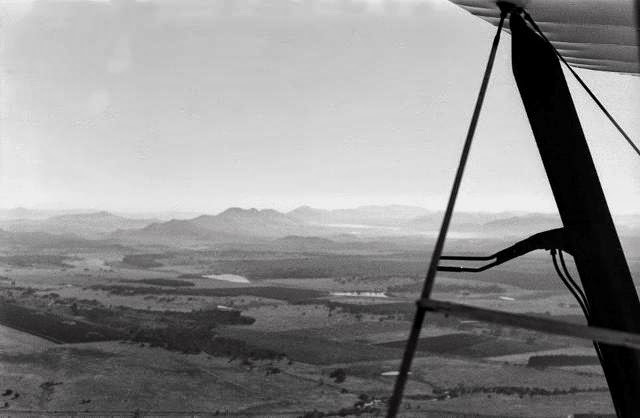 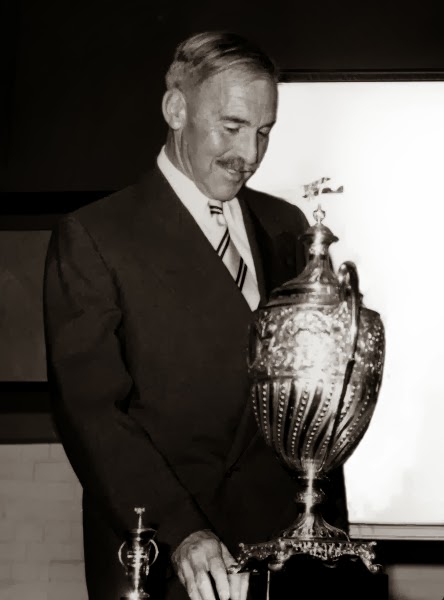 Charles Hilton Prince awarded Pat Judson Trophy.
At the end of the war RAF Mount Hampden Air Station was closed down with a final wings parade on 30 October 1945, although RATG itself continued operations until March 1954. The airfield was neglected and long grass grew on the runway. Buildings and Bellman hangars were used as accommodation for new immigrants. The destruction of many old war birds was a heartbreak for many ex-servicemen as there were aircraft graveyards scattered around the country, mainly in Bulawayo and Salisbury.
But private flying began to re-emerge in 1946 and, with an abundance of experienced flying instructors, activity centred around the resurrected Salisbury Flying Club at Cranborne. War surplus Tigers were commissioned: VP-YCY (EM841) VP-YDM (T7933) and VP-YDN (DX684). The DX or MX prefix indicated Australian built.By 1952 VP-YJU (T6653), VP-YJP (T6292) and VP-YNV (SR94) were in use at the Belvedere and Civil Aviation Flying Clubs and more Tigers joined the civil register at various flying clubs around Southern Rhodesia. Some went to the Bulawayo Light Plane Club at Kumalo. Others went to the Gwelo Light Plane Club, the Victoria Flying Club at Fort Victoria, the Ayrshire Flying Club at Raffingora and Makoni Flying Club at Inyazura. Karoi, Gatooma, Midlands, Enkeldoorn, Marandellas and Wankie — all had their own Flying Clubs.Wartime Tigers even travelled north of the border to Northern Rhodesia, Tanganyika and Kenya. Des Tennett bought Australian built VP-YDC (DX 644) from David Bishop for operation at the Luchenza Flying Club at Thyolo, Nyasaland (at its peak there were five Tigers based at Luchenza). 7Q-YDC was later badly damaged in an accident, but was rebuilt and eventually sold to Bindura Gliding Club. It is currently registered as VH-WHW with Darling Downs Tiger Moths at Toowoomba, Queensland.Many Tigers became the property of private individuals.

With encroaching suburbia at Belvedere and Cranborne, and work in progress at the new international airport at Kentucky, The Flying Club (the renamed the Salisbury Flying Club) moved to the Marlborough racetrack sometime before 1955. Here it operated as the “Marlborough Flying Club” during the week, and over the weekends at Belvedere. VP-YMY (ex South African) was a Marlborough Tiger, before Chip Kay and Des Tennett of Luchenza Flying Club bought it; later it was written off near Lilongwe. 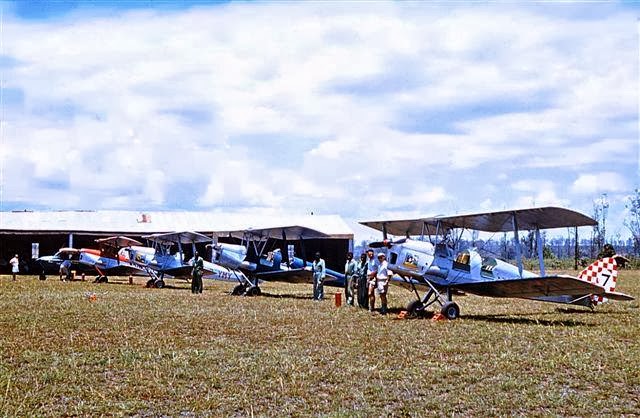 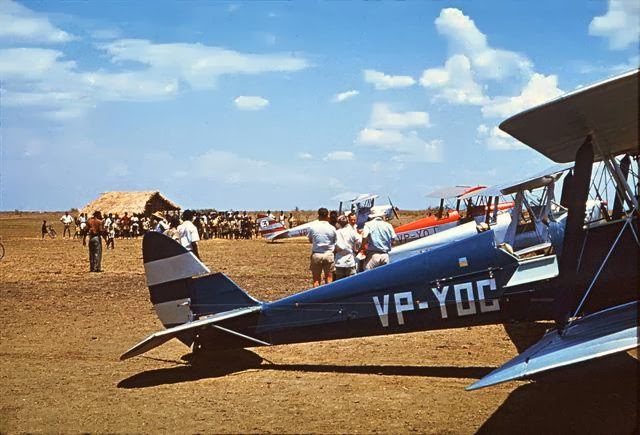 VP-YOC (SR 36) of Nyasaland Flying Club was written off by Dr Russell Jack Harvey at Luchenza in a fatal accident. 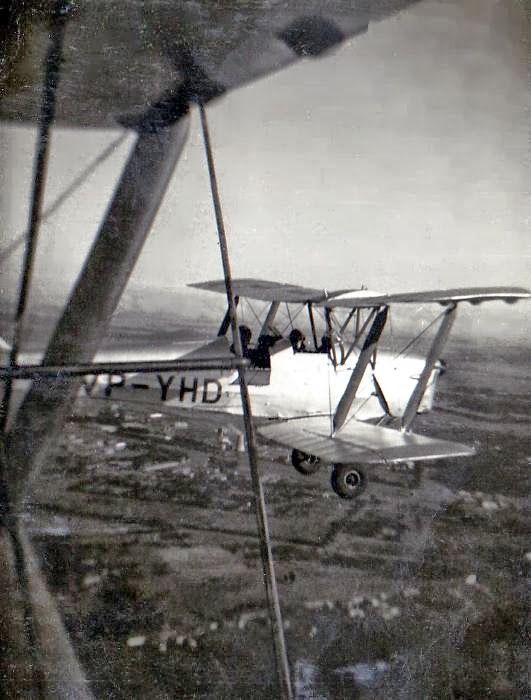 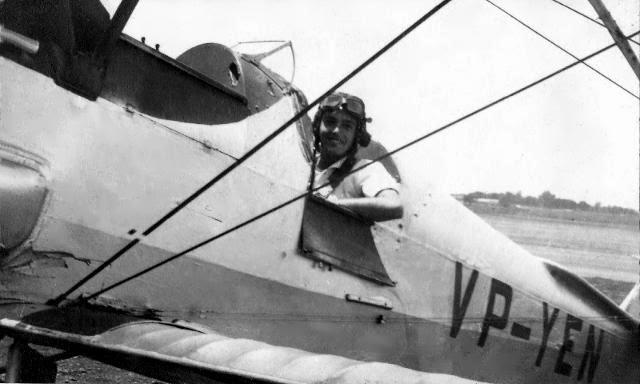 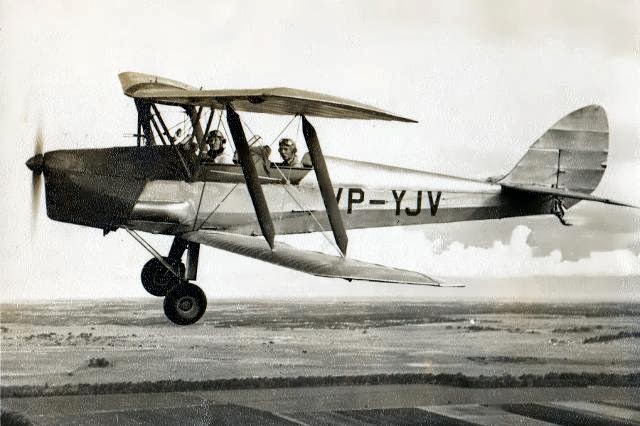 VP-YJV (T6529) with Frank Wingrove and Harry Atkinson. It belonged to T R Nicholson of Salisbury and then D Rogers of Bromley, before Marlborough Flying Club. 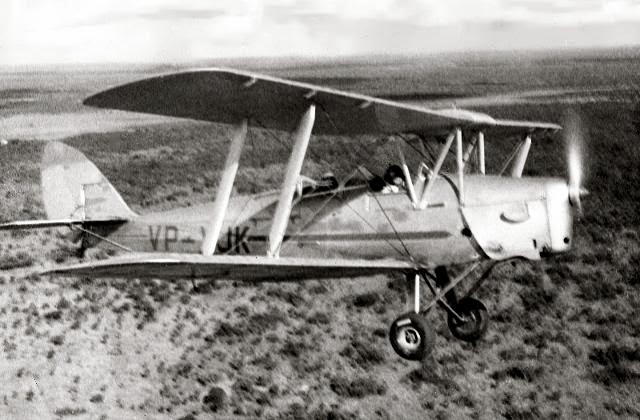 YJK (28 EFTS Australian MC542/DX453) belonged to D B Bellinghan and the Enkeldoorn Flying Club, before being written off at Marlborough Flying Club 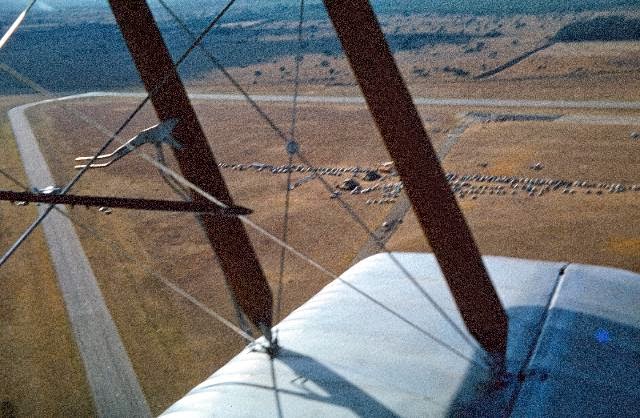 Marlborough from the air 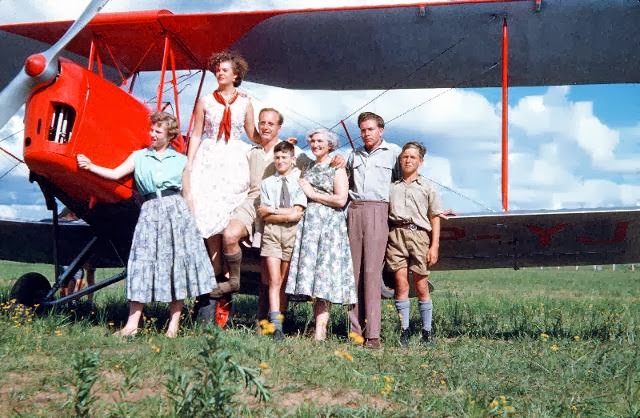 Christmas at Marlborough with family Robinson 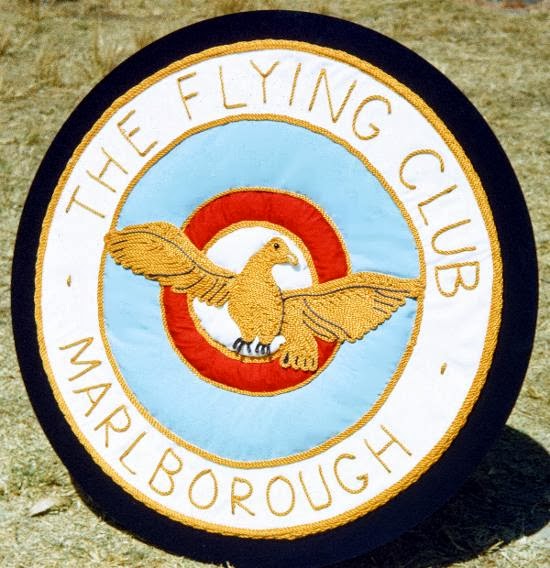 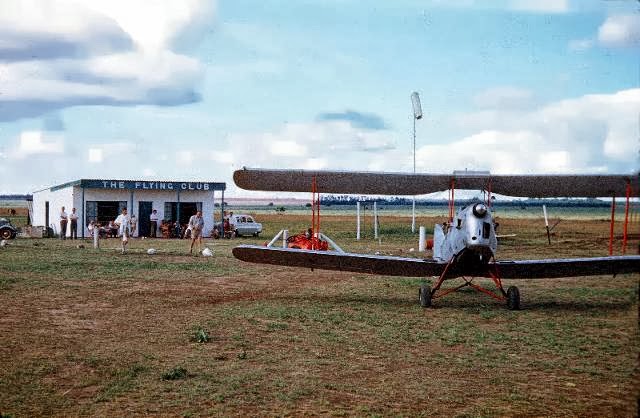 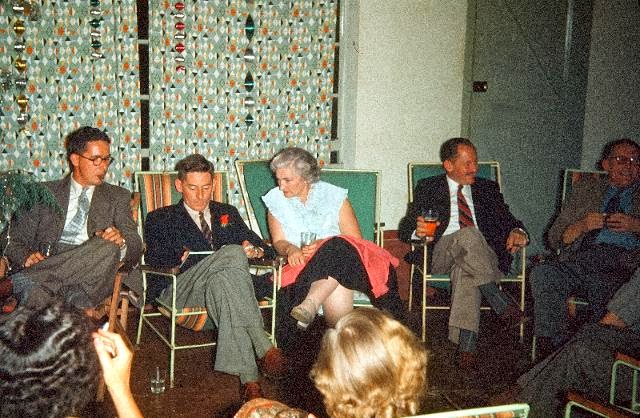 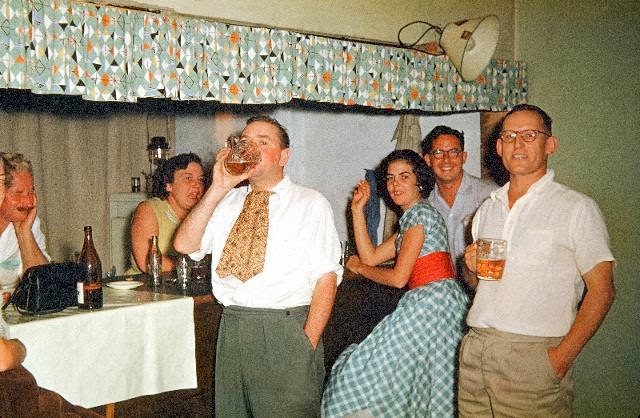 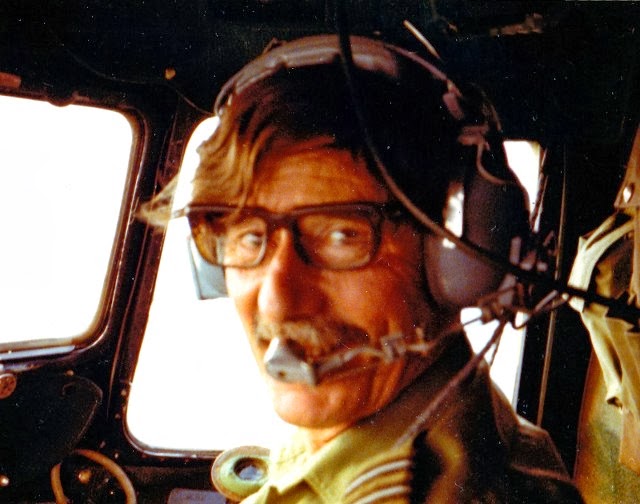 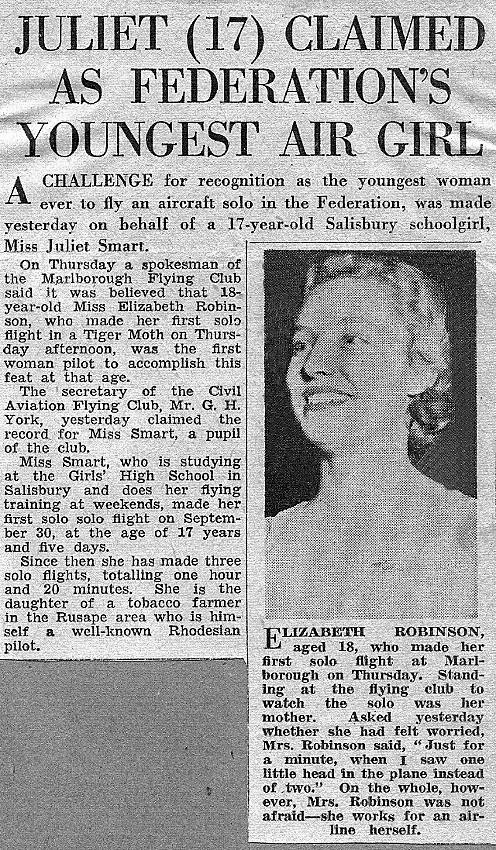 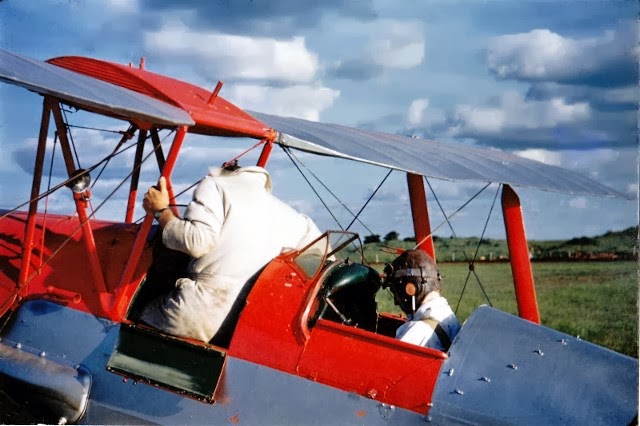 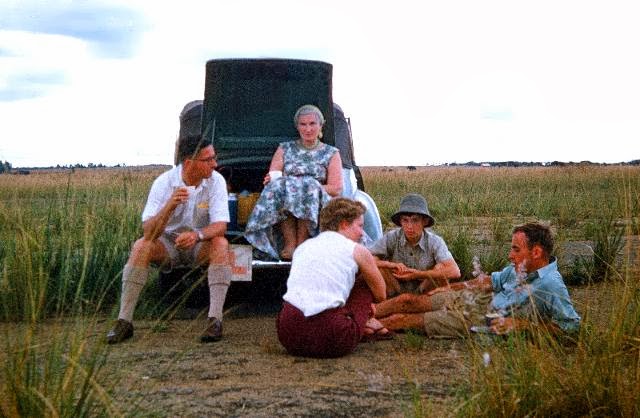 With grateful thanks to Liz Elliot (nee Robinson) and Harold Wienand for some wonderful pictures of the Marlborough Flying Club days and to Dave Newnham for his excellent archive of 28 EFTS operational records and aircraft registers. Dave is forever generous in sharing his research into the “Definitive Rhodesian Civil Aircraft Register.” Any updates and additions to his records will be gratefully received.

As always, many thanks to John Reid-Rowland for his editing skills and for his information on the Brooks family to whom his wife Jane is related. And to Robin Norton for the photo of Tiger SR 26.
John Wynne Hopkins’ Tiger Moth at Mount Hampden graces the introduction to the article — one of his many beautiful pieces of military art which have been much admired in exhibitions around the United Kingdom and further.
Please note — some of the author’s comments [in brackets] are unsubstantiated, although every effort has been made to verify them. The readers’ comments are welcomed, and encouraged, to help complete the aviation picture of “Our Rhodesian Heritage.”
End
Tweet