DC-6 on apron at Salisbury airport

After a great deal of arguing and wrangling and heated words amongst the various heads of department, including the general manager, our operations division managed to achieve success.

We had won our point ─ which was to hire a DC-6 aircraft to use on our London route.

Egypt and England were not on speaking terms at this time, therefore no aircraft, even slightly connected with the hated British, were permitted to over-fly Egyptian territory ─ be it ever so remote and sand infested! To comply with the Egyptian warning that they would shoot down any aircraft violating their territory, all airlines operating in the overseas routes between Benghazi and Khartoum had to fly a dog’s leg to some mythical sand dune in the middle of the Sahara desert to avoid Egyptian territory. This extended leg, coupled with built- in head winds at 12 000 ft (which reached 100 mph and more), caused grave concern for the crews of the relatively short-range Vickers Vikings and Viscounts then in use on this profitable route.  A Douglas DC-6 could easily carry greater loads over a greater distance, so we in operations could not understand what all the fuss and bother was about.

The general manager finally conceded defeat but said to me, ‘Seeing that you have championed this American aircraft throughout our discussions, you and the selected crews who are to fly this aircraft had better get your south ends off to Rome, as I have hired a DC-6B from Alitalia and have arranged conversion courses to begin ASAP’.

The lucky ones selected looked forward to a three month’s stint in the Eternal City. However, it was not all dolce vita. We had some formidable technical knowledge to absorb before we so much as set eyes on the aircraft. Furthermore, apart from bon giorno, come sta, and quanta costa, none of us knew much Italian. And the Italian instructors suffered the same disadvantage, as far as English was concerned. We had to acquire a precise knowledge of hydraulics, pressurisation, fuel system, water methanol injection and a complex electrical circuitry, as well as BMEP (Brake Mean Effective Pressure – a measure of engine performance which was something heretofore unknown to us!)

All this, through the medium of the Italian language, was too much for us and we revolted. So, some American- accented English translators were engaged who had learned their English by watching Hollywood movies: some remarkable translations occurred!

The voluble Italian instructor would, with much expressive gesticulation and arm waving, explain in great detail the inner workings of this complex ship only to have the translator lose all the vital bits in his ‘cotton pickin’ American accent. It was an impossibly LONG course!

~ Now you have a hazard, with dozens of irate Italian drivers all sounding their horns simultaneously and swearing vengeance on the stupid gringo… ~

Meanwhile, our lads got to know Rome, mainly the popular watering holes like the Quirinale, the Da Meo Patacca and the Hole in the Wall. The younger chaps lived it up at Pipistrello. Two of the lads, Tony and Frank, somehow obtained a Lambretta scooter which they put to good use on days off. One was the owner/driver and the other, being the senior, was the navigator who mounted himself on the pillion seat and gave a running commentary on traffic density and on which way to go. Many were their hair-raising exploits. Being used to driving on the left back home, they often fell foul of the law when they came to an interchange. Tony would endeavour to turn left whilst Frank would scream it was a senso unico (ie a one way). Thereupon Tony would do the very thing one must never do in thick Italian traffic, and that is change your mind, because Antonio in his Cinquecento Fiat had to swerve to miss them by a fraction of an inch as he too had been forced to change his mind, and nearly his sex!  Now you have a hazard, with dozens of irate Italian drivers all sounding their horns simultaneously and swearing vengeance on the stupid gringo.

We were all finally presented with large ornate certificates which stated, in superb Italian, that the under-mentioned individual had successfully completed Alitalia’s training syllabus and was now proficient to fly the DC-6B. At last we would get to grips with this mighty monster. Don’t forget that, at this time, the DC-6 represented as modern and efficient a means of transport that could be found anywhere in the world. Jets were still in their infancy and not available to little bush airlines out in the sticks. To us, she was beautiful, specially painted in our livery.

We soon all got the hang of the DC-6 as the flying instructors were far more fluent in English than the classroom lecturers. They had been used to getting all their air traffic instructions in English, as it had been declared the universal language of aviation. The only exception to the bilingual instructors was the chief pilot. He was Italiano solomento and he insisted on flight testing each one of us personally.

The day arrived when we were called upon to demonstrate our skill and dexterity at the controls of Mike Tango (I-DIMT was the registration, India-Delta India Mike Tango). As time was running out, old Solo Mio, as we called him, filled Mike Tango with 100 octane fuel, took on catering in the galley and away we all went. One took one’s turn in the driver’s seat alphabetically.

Tony, being high up on the alphabet kicked off in the left seat, or captain’s seat, with a learner first officer in the right and a learner flight engineer in a kind of folding jump seat between them. Old Solo Mio leaned over the engineer’s shoulders and monitored Tony’s starting, taxiing and handling abilities. After a thorough engine test, we got take-off clearance and away we went, out over the Mediterranean to Alitalia’s training area, high above the normal airways system.

Here each of us in turn was required to do steep turns, stalls, incipient spins and recovery, engine cuts and prop feathering and fire drills. Old Solo Mio had to be satisfied that, if disaster struck, the pilot would manfully stay put and deal with the emergency … and not jump out the adjacent window!

We had been airborne for a few hours and, as it was warm and stuffy in the back of the ship, and what with stalls and steep turns going on, it was easy to become nauseous. I did, anyway, and asked for a glass of water. I was handed a bottle of aqua minerale, only as a second choice to wine. A good Italian never drinks water. Well, I took a good swig of this bubbly juice and then looked for somewhere to put an open bottle of soda water down. There was just nowhere, so I drank the lot, just before being called to the sharp end to demonstrate my proficiency at handling Mike Tango.

All went well through the normal training syllabus and I managed to sort out all the problems that old Solo Mio threw at me and he seemed quite satisfied. Then he suddenly shouted out ‘Decompression Explosif!’ over and over again. This means that the aircraft, which is pressurised and normally flies at about 20 000 ft, has sustained a rupture of sorts and was losing its 4∙5 pounds per square inch. This situation is very dangerous to all on board because, in exceptional cases, one’s blood could boil, with fatal results. The drill is to get the ship down to below 12 000 ft as rapidly as possible.  So I went into action: throttles back, oxygen mask on, stick hard forward, mixture control to rich, pitch to fine … and hope for the best. We were going down in grand style, but unbeknown to me old Solo Mio had instructed the first officer to open the discharge valve a fraction, after he had shouted ‘Decompression Explosif’. He had told Mickey in his best English, which was inevitably misunderstood, and Mickey opened the valve to its full extent! So we really were decompressing, RAPIDLY. This caused complete confusion, because everybody’s ears popped and the cockpit filled with mist.

Above all the noise, I distinctly heard old Solo shout ‘Down, down, down’!

OK sport, I thought, if you want more down, you shall have it. So I gave the stick another good shove forward. Everybody lifted out of their seats, while trying to grab something solid to hang onto. But still I heard him shouting ‘Down, down, down’. So I gave the stick another hefty shove and we were now well past the vertical going down in real earnest, with the altimeter unwinding … like a runaway clock. But still I heard ‘Down Down Down!’ in a frantic scream from old Solo Mio.

I looked round at him in utter disbelief. He was puce in the face. His eyes were bulging and he was pointing towards the roof shouting ‘DOWN DOWN!’

He had mixed up his English and had meant to say ‘Up, up up’ all the time! I rolled the aircraft till we were in a more normal descent path and pulled out of the most spectacular dive a DC-6 has ever been in. We had exceeded the Vne (Velocity Never Exceed) limits by a wide margin. It says a lot for the DC-6 that she suffered no ill effects.

Old Solo Mio, on being told of his faux pas, called it a day and it was then up to me to take the ship back to Rome.

But meanwhile, all those little bubbles in the aqua minerale, which had been quite happy to remain in manageable, if minute, size whilst under 4∙5 psi in my tummy, had now joyously expanded to many times their normal size when we lost pressure. So I became the first pregnant male pilot in history and, I may add, it was most uncomfortable to say the least. However, I managed to land without divulging my delicate state.

We all learned to love that grand old lady and flew happily around Africa and Europe for many years.

On board the DC6

Compiled and edited from the original by Mitch Stirling and John Reid-Rowland. They suggest that the names of the other crew members in the story were: Tony Beck, Frank Flote and Mickey Delport. The redoubtable Captain Conti, Alitalia’s chief pilot, must have been Old Solo Mio. 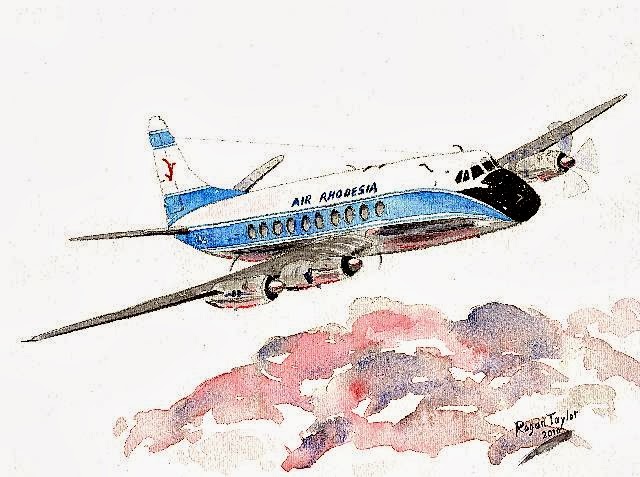 Memories of Vickers Viscounts are deeply etched in the Rhodesian psyche. They played a vital role in the history of “our land of lost content”.
If you lived in Salisbury, and listened carefully, you could even set your clock to the distinctive high-pitched whine of 4 Rolls Royce Dart engines, as RH 828 turned left off runway 06 and headed out across the city to Kariba, Wankie and Victoria Falls. Black or white, big or small, young or old, you loved the Viscounts — those elegant, graceful old ndege. “You could balance a coin on edge during flight”. Millions of people travelled on the Viscounts; many of them were famous celebrities, prime ministers, presidents and monarchs. The Queen Mum was a favourite. END_OF_DOCUMENT_TOKEN_TO_BE_REPLACED